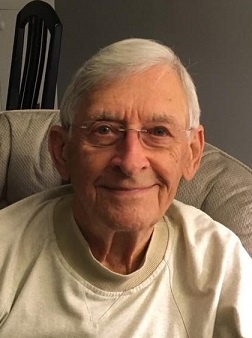 William R. "Bill" Higginson, 87, of Carmi, passed away on Wednesday,  February 10, 2021 at Deaconess Gateway Hospital in Newburgh IN. He was born on July 14, 1933, the son of  Halsey and  Myrtle (Hon) Higginson.  Bill married Myrna "Sue" Mathis on November 8, 1988, and she preceded him in death on February 4, 2020.  He proudly served his country in the United States Army during the Korean War and was stationed in Germany.  Bill worked for Superior Oil and then retired as Superintendent at Equinox.

Bill's number one joy was being around his family. He also enjoyed manicuring his lawn along with his families lawns.  You could find Bill many days, practicing golf at the Carmi Country Club.  Bill took almost daily rides in the country and inevitably ended up at his farm where he grew up near Crossville.  Bill also enjoyed taking vacations with Sue and their good friends Bud and Judy.  Bill was a selfless man who was always helping others while seeking no recognition for himself.  Bill was always in a good mood and an encounter with him would brighten your day.

Funeral Services for William R. "Bill" Higginson, will be private with burial at Stokes Chapel Cemetery in Crossville, Illinois.  In lieu of flowers, contributions can be made in Bill's memory to the Carmi Country Club at P.O. Box 118, Carmi, IL. 62821, and will be accepted at Campbell Funeral Home in Carmi, who is in charge of arrangements.

To order memorial trees or send flowers to the family in memory of William Higginson, please visit our flower store.