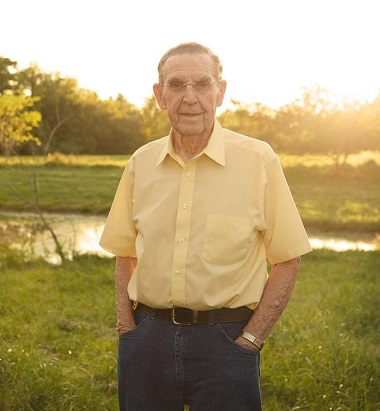 Vernon Edward Hubele departed to his Heavenly home at 8:42 p.m. on Wednesday, February 17, 2021at Deaconess Gateway Hospital in Newburgh, IN. Vernon was born on February 19, 1927 to Norman and Esther (Roland) Hubele of Carmi. Vernon graduated from Carmi Township High School in 1945. He served in the United States Navy from 1945 to 1946. He married Eleanor (Miller) Hubele on October 25, 1946.  He helped his father with construction jobs until he was hired at the Carmi Post Office, where he worked for 35 years. After his retirement, he spent a lot of time working with his hands and creating masterpieces out of wood with Frank Elliott. Over the years,

Vernon faithfully served his church, Emmanuel United Methodist Church, in many capacities, including Sunday School teacher and church treasurer. He was a 70-year member of the American Legion. Vernon loved Jesus first, with his family a close second. You could always find him at a baseball game, swim meet, school play, or any other event his family was involved in. His family brought him great joy. He loved gardening, reading the newspaper, donuts and coffee, laughing at a good joke, and watching the St. Louis Cardinals. He will also be remembered for the $2 bills he enjoyed giving to others. He was a kind, funny, lovable servant of God. Well done, good and faithful servant.

Private funeral services will be held on Tuesday, February 23 at Emmanuel United Methodist Church with a public graveside service at 12 noon at White County Memorial Garden in Carmi. The service will be livestreamed on Campbell Funeral Home’s Facebook page. Memorial contributions can be made to the Emmanuel United Methodist Church Building Fund and can be given at Campbell Funeral Home who
is in charge of arrangements.

To order memorial trees or send flowers to the family in memory of Vernon Hubele, please visit our flower store.