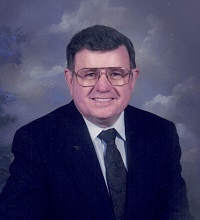 Stanley Creighton Hampton, 90, of Carmi, Illinois passed away on Monday May 10, 2021 at home with his family. He was born on October, 12, 1930, the son of Ray Edward and Grace Ruth (Moore) Hampton. Creighton married Helen Doris Wilson on June 21, 1947 and would have celebrated 74 years of marriage this year. He graduated from Oakland City University and obtained a Master’s Degree from SIU Carbondale. Creighton began his teaching career in Shawneetown, IL  and later taught at Carmi White County High School  from 1967 until his retirement in 1993. Creighton was called to the ministry in 1949, served as a General Baptist Missionary to Guam from 1962-1966, and pastored various churches for over 50 years.

Creighton blessed everyone with his generosity, his honest and straight forward manner, and his quick wit followed by an encouraging word. He typically greeted others with a rhyme, one of his favorite quotes about how “not to quit when things go wrong as they sometimes will”, or a favorite scripture. He was quick to encourage everyone with the knowledge that “If you know the Lord, He is all you need and He will see you through your darkest hour”. Creighton was certainly welcomed into the arms of Jesus with a resounding “Well done, good and faithful servant!”  Creighton loved to cook, crochet, watch Wheel of Fortune as well as spend time with his wife and daughter, granddaughters, and great grandchildren.

Funeral Services for Creighton Hampton will be at 12:00 p.m. on Friday May 14, 2021 at Plainview General Baptist Church in Norris City, Illinois.  Family and friends may visit from 10 a.m. until time of service. Contributions may be made in Creighton's memory to the Cystic Fibrosis Foundation and will be accepted at Campbell Funeral Home in Carmi, IL. Social distancing will be observed and masks are encouraged.

To order memorial trees or send flowers to the family in memory of Stanley Hampton, please visit our flower store.