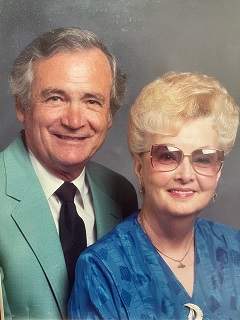 Reverend Lowes D. Browning, 91, of Carmi, passed away on Wednesday, August 18, 2021.  He was born on September 3, 1929, the son of  Marion and Iola (Elliot) Browning. He married Mabel I. Weasel on August 19, 1950. Together they shared almost 71 years of marriage. Louie pastored many General Baptist Churches in the local area for more than 50 years.  He served on the Oakland City University Board for approximately 18 years.  Louie was a Carmi business man and served many meals to the residents of Carmi through the steak house for 15 years. He and his wife owned the Artistic Beauty Lounge and Angel's Halo beauty salons for a time.  Louie was always interested in serving the community of Carmi. He was a member of the Cherry Street General Baptist Church. He was instrumental in establishing this church in September 1966,  where he served as the church's first pastor.  His last Pastorate was at Georgia General Baptist Church.  He pastored there for 20 years.  Louie retired in 1996, but continued to serve wherever God would lead and always returned to Cherry Street Baptist Church.

Louie is survived by his wife, Mabel  Browning of Carmi, IL.;  a son, Thomas W. Browning of Carmi, IL.; one beautiful granddaughter,  Michele (Kenny) Windle of Norris City, IL. and two precious great-grandsons, Stone Windle and Jaxon Windle of Norris City, IL.; siblings, Fred (Mary) Browning of Branson, MO., Wayne (Diane) Browning of Crossville, IL., and Jane McInturff of St. Louis, MO.; and a daughter-in- law, Linda Browning of Carmi, IL. along with numerous nieces, nephews, and brothers and sisters in Christ. He was preceded in death by his parents; a son, Jerry Deane Browning; a daughter, Gayla Joan Browning; a brother and sisters, Joe, Ladorna and Betty; and his father and mother-in-law, Reverend C.S. Weasel and Autha Weasel.

To order memorial trees or send flowers to the family in memory of Rev. Lowes Browning, please visit our flower store.