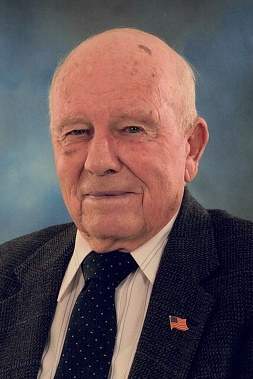 Ralph Gene Hubele, 86, of Carmi passed away on Thursday, December 17, 2020.  He was born on January 19, 1934, the son of Herbert and Neva (Thompson) Hubele.  Ralph graduated from Carmi Township High School in 1950.  He married Rebecca  Murphy on August 29, 1963, and she survives. Ralph proudly served in the United States Air Force from 1956 to 1960.  He worked as a farmer, focusing in grain, corn, soybean, and wheat along with having a small herd of cattle.  Ralph  was a member of Emmanuel  United Methodist Church and the White County Farm Bureau.

Ralph is survived by his wife, Rebecca Hubele; two sons, Joseph Hubele and John (Rachelle) Hubele, both of Carmi; His brother, Roger (Ranelle) Hubele of Enfield and two grandchildren, Jacob and Josephine Hubele.

Private services will be held for Ralph Gene Hubele with burial at White County Memorial Garden in Carmi with full Military Rites provided by the Carmi VFW and the American Legion.  In lieu of flowers, contributions can be made in Ralph's memory to White County Relay For Life and will be accepted at Campbell Funeral Home in Carmi who is in charge of arrangements.

To order memorial trees or send flowers to the family in memory of Ralph Hubele, please visit our flower store.