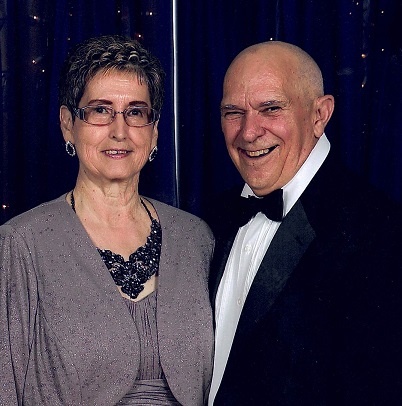 Phyllis K. Daniel, 71, and Wayne Daniel, 72, of Carmi passed away on Friday, May 29, 2020. They were devoted to each other and their family and would do anything for anybody. Phyllis and Wayne met in college and, were married on August 23, 1969.  They shared their faith and served however they could in the church that Wayne was ministering at, from carpentry work to catering they served the Lord together.

Phyllis was born in Maryville, TN on August 8, 1948 the daughter of Vernon and Eliza Ruth (Hanna) Rasor. She graduated from Everett High School in 1966 and went on to attend and graduate with an Associates Degree from Johnson Bible College. She attended the Tennessee School of  Beauty where she also became an instructor. Over the years, Phyllis worked as an Administrative Assistant and Bookkeeper for various businesses and most recently with W & W Truck and Trailer in Carmi.

Wayne  was born in Carmi, IL on February 6, 1948 the son of Harry and Ruby (Sailer) Daniel.  He graduated high school and went on to attend and graduate with a Bacholers Degree from Johnson Bible College.  Wayne served the Lord as he ministered in various churches and most recently at Dale Christian Church.  He also served as chaplain at Wabash Chrisitan Village.  Wayne owned and operated Daniel's Home Repair, doing carpentry work and repairs.

Phyllis and Wayne are survived by a daughter, Rachel Daniel Scott of Carmi; a son, Philip A. Daniel of Centralia; and a grandson, Ian Daniel of Dale, IN.  Phyllis is also survived by a brother, Bill (Phyllis) Rasor of Maryville, TN.  Wayne is also survived by four sisters, Margaret (Bill) Burrows of Murfreesboro, TN, Roberta Joyce (Roy) Jackson of Boonville, IN, Lillian Boehringer of Evansville, IN. and Phyllis Kuykendall of Carmi.

A drive through visitation will be held on Wednesday June 3, 2020 from 5pm to 7pm at Burrell's Wood in Carmi.  Private family burial will be in St. John's Cemetery in Carmi.  The family request no flowers be sent and that instead donations be made to the Murray Parent's Association, 1535 W. McCord St., Centralia, IL 62801, where Phyllis and Wayne's son is a resident, so that a fund can be established to support and assist Philip and the other residents. Donations will be accepted at Campbell Funeral Home, 609 W.Main St, Carmi, IL  62821 who is in charge of arrangements.

To order memorial trees or send flowers to the family in memory of Phyllis and Wayne Daniel, please visit our flower store.