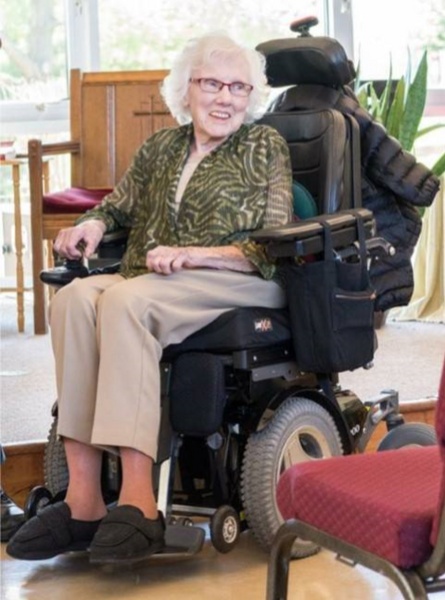 Patricia Paynter, 80, of Carmi died on January 28, 2018. She was born on Oct. 12, 1937 to John and Lucille (Wallace) O’Daniell, in the home of her aunt Lena (Wallace) Norton in Alto Pass, IL. They precede her in death, along with her brother Wallace O’Daniell.

Pat graduated from Alto Pass High School, Southeastern Illinois College, Southern Illinois University and the University of Evansville. She worked most of her career in the Illinois Department of Human Services. She served as an AFSCME union steward, helped negotiate union contracts with the State of Illinois, and worked on welfare reform. Upon retirement she volunteered in the Jefferson School reading program and the Crossville School Library. She was a church musician for 70 years, mostly recently at St. Polycarp Catholic Church.

Pat was active in the community, serving as an officer of the Carmi League of Arts, on the board of the AIDS Resource Group of Evansville, as a volunteer for the Tri-State Alliance AIDS Holiday Project, was a member of First Christian Church, and a founding member of Evansville PFLAG. She was an active volunteer for MDA, volunteering for the MDA Telethon in both Evansville and Cape Girardeau. She won the Indiana MDA Advocate of the Year Award and the Steven St. Julian HIV Leadership Award.

Her most important role was mother. She is survived by her children, Elizabeth (Billy) Taylor and Wally Paynter of Carmi; Donnie Paynter and Mary Biever; by her grandchildren Riley & Jacob Paynter and Elizabeth & Nicholas Biever; and 2 great grandchildren. While raising 4 children she moved her parents and her Aunt Ida Wallace Choate to Carmi to care for them, all while working full-time. She served as a mother to many other people, whose lives she touched deeply. The family thanks those who worked so hard to care for her including Dr. Saqib, Phyllis Kuykendall, Shelly Taylor, Patti Acord, Joyce Masser, and her children Elizabeth and Wally.

Funeral services for Patricia Paynter will be held at 10:30 a.m., Wednesday, January 31, 2018, at St. Polycarp Catholic Church in Carmi, IL.  Burial will be in St. John's Cemetery in Carmi. Visitation will be on Tuesday, January 30, 2018 from 4:00 p.m. to 7:00 p.m. at Campbell Funeral Home in Carmi.  In lieu of flowers, the family asks that memorial donations be made to the Tri-State Alliance (TSA) AIDS Holiday Project, PO Box 2901, Evansville, IN 47728 OR donate online at www.AIDSHolidayProject.org and will be accepted at Campbell Funeral Home in Carmi.

To order memorial trees or send flowers to the family in memory of Patricia Paynter, please visit our flower store.