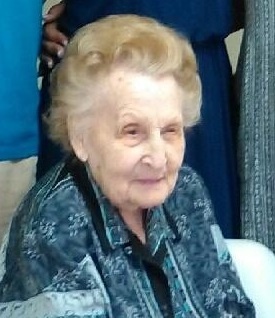 Mary Edith Renshaw, 99, of Carmi, passed away at 10:55 p.m., Tuesday, July 17, 2018 at Wabash Christian Village. She was born in Denver, CO on September 6, 1918 the daughter of Bradford Henderson and Idah (Leathers) McLaughlin. Mary married James E. "Bud" Renshaw in 1930 and he preceded her in death on October 26, 2011. In her early years before coming to Carmi she worked in the payroll department at Marshall Fields. She owned/operated Dairy Queen alongside her husband Bud. Mary was a member of DAR, the First Christian Church and was a dedicated member of Beta Sigma Phi Sorority for almost 80 years and a sponsor of the Beta Nu Chapter. She was an avid golfer and always loved watching golf.

Mary is survived by two grandchildren, Brad and his wife, Tammy Renshaw of Carmi and Valerie Caputo; four great-grandchildren, Blake Renshaw, April (Erik) Rice and John and Jason Caputo; and one great-great-granddaughter, Addison Renshaw. Mary was preceded in death by her husband, Bud, her son, Billy Renshaw and a grandson, Brian Renshaw.

Graveside funeral and burial services for Mary Edith Renshaw, 99, of Carmi, will be held Thursday, July 19, 2018 at 10:00 a.m. at White County Memorial Garden near Carmi with Greg Grant officiating.  Friends and family are asked to meet at the cemetery. There will be no visitation. Memorial contributions may be made in Mary's memory to the Alzheimer's Drug Discovery Foundation and will be accepted at Campbell Funeral Home in Carmi who is in charge of arrangements.

To order memorial trees or send flowers to the family in memory of Mary Renshaw, please visit our flower store.