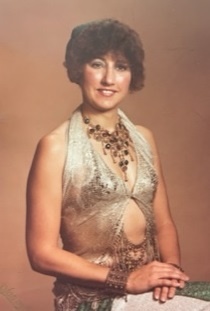 Mary Helen (Wilson) Drone of rural Carmi, Illinois, passed away peacefully at her home on April 25, 2022, after a long battle with lymphoma.  Mary was born on April 15, 1954, to Lowell and Louise Wilson.  She married R. Michael Drone on August 17, 1974, at St. Joseph Catholic Church in Ridgway, IL, and he survives.  Mary loved dance and exercise and taught classes in both through SIC and White County Senior Citizens.  She learned belly dancing in Champaign, IL, and taught classes on that as well.  Mary was kindhearted.  She was a devout Christian.  She read the Bible regularly and looked forward to her eternal reward, which has finally arrived. Requiescat in pace. Alleluia.

Mary is survived by her husband,  one son, Keith (Jennifer), and three grandchildren, Marigold, Theodore, and Julian.  She was preceded in death by her parents and a brother.

She was cremated per her request and will be interred in a private service at a later date.  In lieu of flowers, donations can be made in Mary's memory to Hospice of Southern Illinois, and Chemo Buddies in Evansville, IN.  Campbell Funeral Home in Carmi is in charge of arrangements.

To order memorial trees or send flowers to the family in memory of Mary Drone, please visit our flower store.