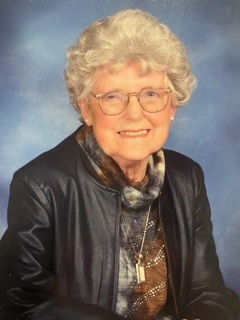 Margaret (Unfried) Stahl died on November 25, 2021, at Enfield Rehabilitation and Healthcare Center in Enfield, Illinois, aged 96. Margaret was born September 19, 1925 to Lawrence Leo Unfried and Sarah Frances (Driscoll) Unfried of Enfield. She attended Enfield High School, graduating in 1944. In 1947, she married Harold Stahl, after having faithfully stayed in touch with him via regular letters as he served in the Pacific during World War II. Their marriage lasted 74 years, until Harold's death in 2021. They made a home together in rural Enfield and began farming, which would continue to be their occupation until they retired in 1988. In 1990, they sold their homestead and moved to Carmi.

Margaret was engaged with her community in many ways throughout her life. She was a member of St. Patrick’s, in Enfield and then, after moving to Carmi, of St. Polycarp's, where she was an active member of the Ladies Guild. She was also part of the White County Home Culture Club, VFW Auxiliary, and ASC. She and Harold served as a host family for Yukari Uno, an exchange student from Japan, in 1981. Yukari and her family remained in touch, and even came back to visit multiple times. In retirement, Margaret and Harold served as election judges and as bailiffs for countless trials at the White County Courthouse. Margaret loved animals and even in her last days, she took joy in petting her great grand dog, Jenkins. In their home, she was surrounded by houseplants, which she enjoyed sharing as cuttings with friends and family. They loved to travel, with trips to Japan and Europe being the highlights. She appreciated good fashion and never appeared in public less than perfectly dressed. Margaret loved to cook, making holiday meals seem easy, which was crowned by her classic Pineapple Upside-Down Cake. Her love of cooking was an outgrowth of her love of family and friends; Margaret loved people, those she'd known forever and those she'd just met. Until the end of her life, she was making new friends.

Graveside Funeral services and burial for Margaret Stahl, will be held at 1:30 p.m. on Friday, December 3, 2021, at St. Polycarp Catholic Cemetery in Carmi.  In lieu of flowers, contributions can be made to Pets At Risk, and will be accepted at Campbell Funeral Home in Carmi, who is in charge of arrangements.  The family requests that COVID precautions be observed, and that masks be worn and social distancing be practiced.

To order memorial trees or send flowers to the family in memory of Margaret Stahl, please visit our flower store.