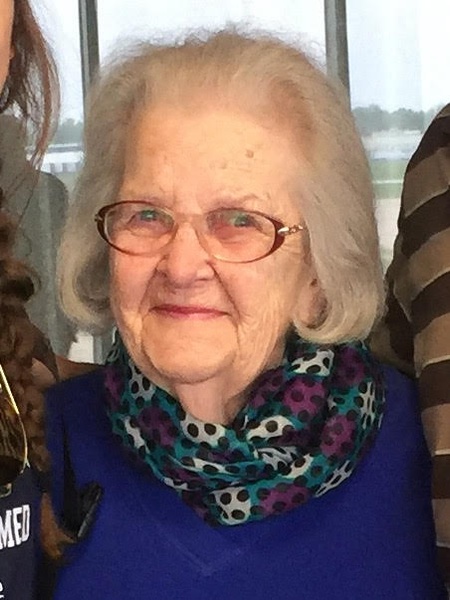 Louise Nichols, 95, left this world just before 8:00 Sunday morning, May 3, 2020. She was at Wabash Christian Village with loved ones by her side. She was born on June 23, 1924 in Olney, Illinois, the daughter of William Thomas and Aline (Graves) Nichols.

Louise graduated from Carmi Township High School and worked at the Ice Company in Carmi. She attended a business college and around the age of 21 moved to Evansville, Indiana where she remained for most of her adult life. She accepted a position at Servel (an American manufacturer of heating and cooling appliances). As the United States entered WWII Servel shifted its manufacturing to support the war effort, and Louise was proud to be a part of that. At one point she was put in a managerial position where she was supervisor to several men in the plant. This was not common in this era and did not go over well with one of the men, but she was assertive and stood her ground. She eventually took a job with Meade Johnson and because of her skills, both secretarial and analytical/numerical, she quickly advanced with the company and became secretary to some of the top administrators. She laughed when telling the story of one “boss” calling her “Miss Dimes”. Louise retired with fond memories after 36 years with Meade Johnson/Bristol Meyers. She loved working there, so much so that in the past few years when passing by the building she would blow kisses toward them.

While living in Evansville, Louise enjoyed playing golf, flying and traveling with friends. She loved old black and white movies and listening to Big Band music. She and her friends would frequently go to the USO to dance and have a good time. Family was very important to her and she made weekend trips from Evansville to visit (bringing Donut Bank donuts on many of those visits). Louise was adventurous and would attempt many things in her Golden years and at the age of 91 hopped on the back of a 4-wheeler for a ride around the farm. She loved family gatherings and enjoyed the laughter, food and a good margarita.

Having no children of her own, she “mothered” many. She was full of advice and would freely give you some even if you weren’t asking for it. She adored her nephew Dink, and treated him as if he were her son. Dink’s wife and their children brought such joy to her life. She treasured her great nephew Sawyer and great niece Haley as if they were her own grandchildren. When her great-great nephew Truett came along in 2018, she was “over the moon” with him. If you happen to be around her she would gladly tellyou about him. She was so proud of her “kids’” accomplishments and was happy to be around for so many milestones in their lives.

She was still driving at the age of 91. When driving in the country to visit, she would “honk” going up hills to warn drivers on the other side of the road that she was coming, and she advised us to do the same. She often reminded the kids when they were younger and eating something to “chew, chew, chew”. She loved her coffee and wanted it often and liked it black and HOT. In the mornings when visiting, she would walk into the kitchen, clasp her hands and exclaim “COFFEE!” and ask “do you have anything sweet?” She rarely passed up something sweet and especially liked chocolate and ice cream and wasn’t shy about asking for some when she visited. Louise was a “city girl” at heart (city as in Evansville) but she loved coming to the country and breathing in the country air. She didn’t like bugs, was afraid of germs and was not an animal lover. She would screech loudly if one came within three feet of her. She did however, come to tolerate the dogs that belonged to her “kids”.

Louise was extremely giving. She supported a long list of charities for many-many years. When at a restaurant, her meal would arrive, and as soon as the server walked away, she was offering to share items from her plate with anyone else at her table. She was a slow eater and said they should invent plates with warmers in them to keep the food warm while eating.

Louise loved our Lord and savior and spent most Sundays watching Christian television programs. She loved fiercely and was loved by many. All who knew her will never forget her tenacity, generosity, spunk, wit, charm and grace (when pertinent) and undying love for them.

She will be greatly missed and leaves behind her nephew Gary “Dink” Nichols and wife Robin of Carmi; Great nephew Sawyer Nichols and his wife Amber of Pinckneyville; Great Niece Haley Edwards and her husband Brent and great-great nephew Truett of Carmi and a large extended family who loved and cared for her. She was preceded in death by her parents, and two brothers, John William and Willard Nichols.

To order memorial trees or send flowers to the family in memory of Louise Nichols, please visit our flower store.