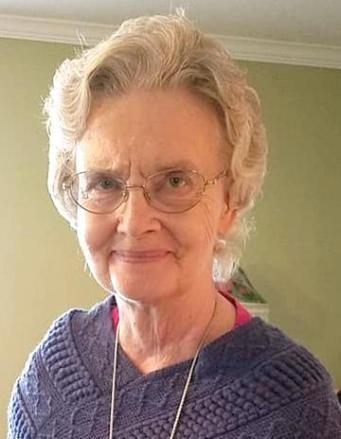 
Lorna Thelma (White) Holtzclaw, 76, of rural Carmi, Illinois, celebrated Mother’s Day on Sunday, her 59th wedding anniversary on Tuesday, and was welcomed into the arms of Jesus early Thursday morning, May 16, 2019, at Hamilton Memorial Hospital in McLeansboro, Illinois.

On her last day on earth, she spoke to each of her children, freely announcing that she just absolutely loved her husband. She also made a doctor’s appointment that she wouldn’t need to keep. She went to church that evening, and at bedtime, began a journey into Heaven with a prayer on her lips.
She was born Aug. 14, 1942, in Evansville, Indiana, the first-born daughter of George Quinton and Thelma Alfreda (Hoovler) White. She grew up in the house her father built in Phillipstown, Illinois, later moving a few miles north in Phillips Township. She graduated from Crossville High School two weeks after marrying the love of her life, Andrew Jefferson Holtzclaw, on May 14, 1960, in Fairfield, Illinois.

She worked at White County Nursing Home, Carmi Township Hospital and Wabash Christian Retirement Center prior to retirement. She was a Spirit-filled woman of God, raising her children in the former Gospel Temple Pentecostal Church in Carmi and the First Apostolic Church of New Haven, the church her father-in-law Rev. Martin Holtzclaw, founded. She wrote letters and cards, compiled her church newsletter, taught Sunday School and entertained her family with reports of her latest wild and silly dreams. She was an encourager and a powerful prayer warrior.

She was a voracious reader and collected enough books to fill the empty bedrooms of her grown children. As a girl, she enjoyed family plane trips back to Pennsylvania to visit grandparents, her father piloting and her mother tossing plates to her uncle in her grandfather’s cow pasture to let family know where they’d be landing.
She loved animals, nursing runt piglets and puppies and horses to health. She raised a bull given to her by her father and let him grow to a ripe old age. She once chased a loose cow through the fields in her beat-up Chevy Impala. She helped tend to coonhounds, Beagles, German Shepards and doted on her Toy Fox Terriers and Miniature Terriers. She never mastered mowing lawns or riding mini-bikes, but hauled her children around the countryside in a wagon pulled by a John Deere mower.

She wasn't a runner, but when her husband raced his monster mud trucks, she ran the full length of the drag pit for every heat he was featured in.
She told great stories and never missed a school program.
Dubbed “Pink” by her firstborn grandson in 1990, she loved the name and celebrated it, marking her 50th wedding anniversary vow renewal in a hat with a bright pink ribbon, kissing her husband at the altar.

She is preceded in death by her father, her in-laws Martin and Mildred Arlene Holtzclaw, and several sisters and brothers-in-law.
She always said she didn’t want a sad funeral. Instead, she wanted a celebration of Jesus and an altar call, because she knew she would be dancing in Heaven and she wanted everyone she loved to make sure to be joining her.

Her home-going celebration is 11 am Saturday at First Apostolic Church in New Haven, Illinois, Rev. Todd Holtzclaw officiating. Burial follows at Marshall Ferry Cemetery. Visitation is from 4-7 pm Friday at Stendeback Family Funeral Home, 200 South Walnut Street, Carmi.
Memorial donations may be made to First Apostolic Church of New Haven and can be made in care of the funeral home. Online condolences may be left at stendebackfamilyfuneralhome.com

To order memorial trees or send flowers to the family in memory of Lorna Holtzclaw, please visit our flower store.