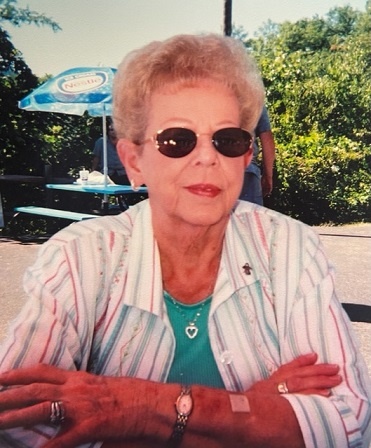 Lois A. Gwaltney, 87, of Carmi passed away at her residence on Tuesday, April 26, 2022. She was born in White County, IL the daughter of Herbert and Janet (Rogers) Seal. Lois married Ted F. Gwaltney on May 10, 1956 and he survives.  She attended Stewart Street Baptist Church in Carmi and  enjoyed her flowers and square dancing with Ted.  Lois worked for many years at Eastwood Sand and Gravel in Grayville before becoming the Hostess at Two Tony's and in more recent years, Ginny's.

Lois is survived by her husband of 65 years, Ted; a sister-in-law, Ann Seal of Evansville; nieces, Terri (Jeff) Whitler of Carmi and Karen (Rachel) Seal of Evansville; along with several Gwaltney nieces and nephews.  She was preceded  in death by her parents and a brother, John William Seal.

Funeral services for Lois A. Gwaltney, 87, of Carmi will be held at 2:00 p.m., Thursday, April 28, 2022 at Stendeback Funeral Home in Carmi.  Burial will be in Stokes Chapel Cemetery near Crossville. Visitation will be held on Thursday from 1:00 p.m until service time at Stendeback Funeral Home in Carmi.  In lieu of flowers, memorial contributions may be made in Lois' memory to St. Jude Children's Research Hospital.

To order memorial trees or send flowers to the family in memory of Lois Gwaltney, please visit our flower store.