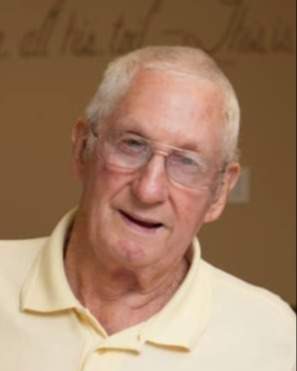 John E. Anselment, 94, of Carmi, Illinois passed away on September 11, 2022.  He was born on August 7, 1928 to Louis and Alma (Kallenbach) Anselment. Alma passed when he was four years of age.  His step-mother, Belle (Allen) Cozart Anselment helped Louis raise John and his siblings. John married Verla Stahl on September 19, 1954 in Carmi.

He was an Army veteran of the Korean War. He was a carpenter for Cozart and Anselment Building Contractors and worked into his seventies. In 1976, he had heart surgery at the Cleveland Heart Clinic. This began a 46 year journey as a heart patient which did not slow him down.  He enjoyed boating, water skiing, camping and drinking coffee with friends. He could turn a "stranger" into a "friend" in a matter of minutes. The last several years of his life was spent doing his most beloved activity of greeting kids in the mornings at Lincoln Attendance Center.

He is survived by his wife, Verla, his daughter, Lana Anselment (Ben LaBudde), his half-sister, Deane Fleck, his sister-in-law, Pat Stahl, his friend since childhood, Roscoe Templeton and many nieces and nephews whom he loved very much. He was preceded in death by his parents, his brothers, Kenneth and Ralph Anselment, his sisters, Doris Fleck and Minnie Anselment, his step-brothers, Roy and Sonny Cozart.

A special thanks to the staff of Wabash Supportive Living and Wabash Christian Village. He considered all of you his friends and appreciated your kindness.

Thank you to St. Vincent Cardiology for their excellent care over the years.

Funeral Services for John E. Anselment, 94, of Carmi will be held at 11:00 a.m., Saturday, September 17, 2022 at First Christian Church in Carmi.  Burial will follow in White County Memorial Garden in Carmi with full military honors by the Carmi American Legion and VFW.  Visitation will be held on Saturday from 9:00 a.m. until service time at 11:00 a.m. AT THE FAMILY'S REQUEST, THOSE WISHING TO ATTEND VISITATION OR THE FUNERAL WILL BE REQUIRED TO WEAR A MASK. A live stream of the service will be available on the Campbell Funeral Home Facebook page.  In lieu of flowers, memorial contributions may be made to Lincoln Attendance Center and will be accepted at Campbell Funeral Home in Carmi who is in charge of arrangements.