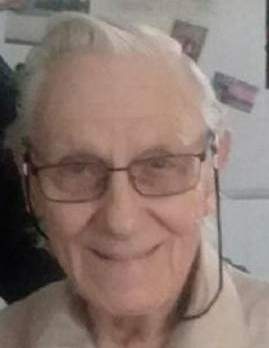 Jerome D. Clarke 84 of Enfield, passed away Sunday September 1, 2019 at Wabash Christian Village. He was born October 12, 1934 in St. Louis, MO the son of William “Bill” and O’Hara Clarke. He was first married to Sonja (Coale) Hall and later married Wilma Clarke and she preceded him in death.

Jerome worked for many years as a Bartender and later in Security. He was a veteran of the United States Army and a member of the V.F.W. and American Legion. He loved bowling and accomplished 2 “300” games in his career. He attended Ashland Christian Church.

He is survived by his daughter, Denise (Terry) Harrison of Enfield; grandchildren, Stephanie (Ryan) Taylor, Patrick (Holli Musgrave) Harrison and Brooke Harrison; great-grandchildren, Ryleigh and Remington Taylor, Khloe Bassemier, Axel South and Waylon and Cora Harrison. He was preceded in death by his brother, Mike Clarke.

Funeral services will be held at Noon on Friday September 6, 2019 at the Stendeback Family Funeral Home in Enfield with Braden Willis and Chaplain Mike Fields officiating. Burial will be in Mt. Pleasant Cemetery near Burnt Prairie. Visitation will be held from 10 a.m. until time of services on Friday at the funeral home. Military graveside rites will be conducted by the Carmi American Legion and V.F.W. Online condolences may be left at stendebackfamilyfuneralhome.com

To order memorial trees or send flowers to the family in memory of Jerome Clarke, please visit our flower store.