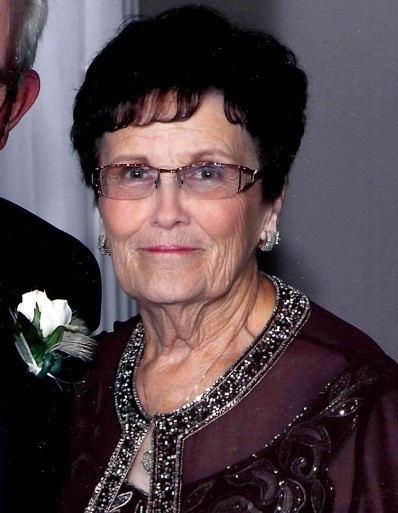 Jeraldine “Jerry” (Benner) Winebarger of New Harmony, Indiana passed away surrounded by her family on February 23, 2020.  She was born in Black Township to Manuel and Irene (Eagan) Benner on January 13, 1937, the youngest of four girls.

Jerry married the love her life, William “Bill” Winebarger, in 1954.  They had two daughters, Sheila (Tony) Morrow and Susan (Fred) Beuligmann.  Bill and Jerry built their home together and worked on the farm side by side.  Their home became a destination treat for all of their grandkids as Jerry took care to decorate for every holiday, big and small.  Her Christmas lights will be greatly missed.  If she wasn’t working in her yard or decorating her home, Jerry loved to collect jewelry, to shop, to spend time with her family, and to watch Fox News.

She is preceded in death by her parents, her sisters, Martha Lester and Joan Russell, and her grandson, MacKenzie Morrow.

Funeral services will be held at 1:00 PM on Thursday, February 27, 2020 at Stendeback Family Funeral Home in Mt. Vernon, with her nephew, Pastor Danny Lester officiating.  Burial will follow at the Old Beech Cemetery.  Visitation will take place from 10:00 AM until time of service.  In Lieu of flowers, memorials may be left to St. Jude Children’s Hospital. Online condolence may be left at stendebackfamilyfuneralhome.com

To order memorial trees or send flowers to the family in memory of Jerldine Winebarger, please visit our flower store.