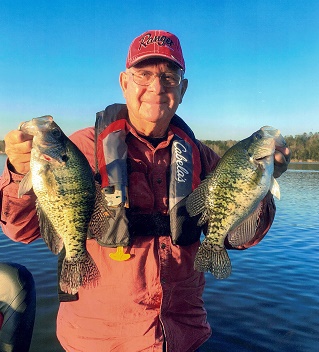 Henry Robert Haley gained his heavenly home on April 22, 2021.  Henry was born July 13, 1945, to Raymond and Caroline (Stockhowe) Haley.  Henry Bob was an active member of Emmanuel United Methodist Church  and walked in faith with his Saviour Jesus Christ. Henry Bob was a graduate of Carmi Township High School and Eastern Illinois University.  He was proud to answer the call to serve his country in the U.S. Army and was a Vietnam Veteran. Upon his return to civilian life, Henry joined the family business and worked as an operator and owner of Raymond Haley Well Service. Henry Bob started fishing at an early age and became an avid crappie fisherman.  He was well known on the tournament trail for over 30 years, partnering with his wife, Jo, for the past 23 years. Henry Bob loved competitive fishing and always said the best part of the tournament trail was the many friends he made over the years. He was also a 50 year member of the Carmi Elks and Masonic Lodge.

Henry Bob is survived by his loving wife, Jo; son Duff Haley, his mother-in-law, Ann Niekamp,  along with cousins and many friends. He was preceded in death by his parents, Raymond and Caroline, uncle Elvis Stockhowe and father-in-law, Melvin Niekamp.

Please click here to view the video tribute
To order memorial trees or send flowers to the family in memory of Henry Haley, please visit our flower store.