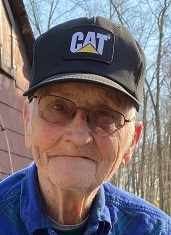 Harvy D. Brinkley, 89, of Norris City passed away on Saturday, July 10, 2021 at 10:05 p.m.,  at Deaconess Midtown Hospital in Evansville, IN.  He was born on December 12, 1931 in Equality, IL the son of John Claude and Mae Victoria (Black) Brinkley.  Harvy married Amelia "Tootie" Douglas on July 12, 1959 at Prospect Church in Broughton.  He had worked as an over the road truck driver for USAC and later went on to own and operated Harvy Brinkley Dozer Service.  Harvy faithfully served his country in the United States Marines during the Korean War.  He achieved the rank of Second Lieutenant and was also awarded a Purple Heart.

To order memorial trees or send flowers to the family in memory of Harvy Brinkley, please visit our flower store.