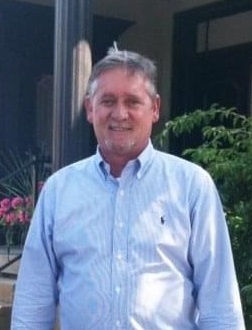 Gary Lee Evans, 62, of Carmi passed away at 11:05am, on Friday May 29, 2020 at Wabash Christian Village.  He was born on June 3, 1957 the son of Ralph and Janice (Staley) Evans. Gary graduated from Carmi Community High School in 1975 and joined the Army.  After his time in the service, he attended Southern Illinois University where he studied geology. He owned and operated oil companies for over 35 years. Gary enjoyed boating and family gatherings.  He was also a lifelong sports fan and an avid Cubs fan.

Gary is survived by a son, Michael Evans of Kansas City, Mo.; two daughters, Abbey (Bill) Bonan of St. Louis, Mo. and Cydnee Cummings-Evans of Grayville; his mother, Janice Frashier of Carmi; two grandchildren, Baron and Bella Bonan; two sisters, Becky (Mark) Stanley of Carmi and Susan Ellison of Indianapolis, IN.; a brother, Doug (Karen) Evans of Naples, FL.;his partner Brenda Lack of Carmi, and many nieces and nephews. Gary was preceded in death by his father, Ralph Evans; and a brother, Michael Ray Evans.

Private graveside services for Gary Evans, 62, of Carmi will be held in Marshall Ferry Cemetery near Maunie.  A celebration of Life event will be held at a later date.  In lieu of flowers, memorial contributions may be made in Gary's memory to the Baptist Children's Home in Carmi, and will be accepted at Campbell Funeral Home in Carmi who is in charge of arrangements.

To order memorial trees or send flowers to the family in memory of Gary Evans, please visit our flower store.