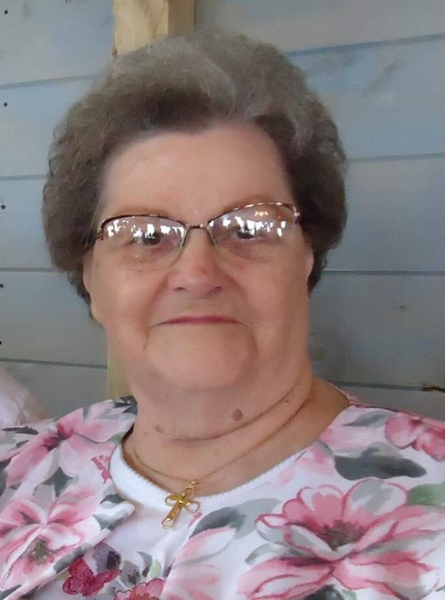 On Friday, March 26, 2021, Freddie Jo Colson, beloved mother and grandmother, passed away peacefully at Ferrell Hospital in Eldorado, Illinois, at the age of 88. Freddie Jo was born on December 9, 1932 to the late Fred Buck and Bertha (Bisher) Conyers in the rural Sugartree Ridge community in New Madrid County, Missouri. Freddie Jo’s parents were sharecroppers and when she was growing up, she and her 10 brothers and sisters helped their parents tend the land.

On March 25, 1950, Freddie Jo married the love of her life, Joe Cook Colson, and the couple had two children, Don and Sharon. A few years later, Freddie Jo and Joe moved to Carmi, Illinois, where they spent the rest of their lives. The couple was actively involved in Stewart Street Baptist Church. After her children were grown, Freddie Jo began working in Carmi as a school cook where she fed thousands of children over the years and met her group of lifelong friends. She continued working for the school until her first great-grandson was born, when she decided to retire so she could help take care of him.

Freddie Jo was skilled at sewing, crocheting, and making crafts. She made many clothes for herself and her family and loved to crochet afghans to give as gifts. She also found joy in taking designs for the latest fashions and making them for her grandkids. Beyond just her skill as a seamstress, Freddie Jo was also a wonderful artist and was honored in her youth when one of her paintings was selected to be published in a magazine.

Possibly due to her experience tending plants during her childhood, Freddie Jo was an avid gardener and had quite a green thumb. She always had dozens of beautiful flowers on her porches and could coax pretty much anything to grow. In addition to flowers, Freddie Jo and Joe always had an abundant vegetable garden where they grew and preserved the majority of the food they ate. The garden became a family affair as well… Freddie Jo never had difficulty finding help to break green beans. All she had to do was offer up a trip to the Dairy Queen, and her grandkids jumped to help.

Anyone who knew Freddie Jo was aware of her prowess in the kitchen. Not only did she feed hundreds of children every day at school, she was also well accustomed to feeding her large family bountiful Sunday dinners and holiday meals. No one ever left Freddie Jo’s house hungry. She always loaded the table with delicious, hearty fare, and was especially known for her fried chicken and chicken and noodles.

Most of all, Freddie Jo loved spending time with her loved ones. Her family will remember her as the kindest, most selfless person they ever had the privilege to know and will miss her ability to make everyone feel seen, loved, and valued. The world is a darker place without her.

Funeral Services for Freddie Jo Colson, 88 of Carmi, will be held on Tuesday, March 30, at 1:00 p.m. at Campbell Funeral Home in Carmi. Burial will follow at Union Ridge Cemetery near New Haven, Illinois. Friends and Family may visit on Monday, March 29, from 6:00 p.m. until 8:00 p.m. at the Funeral Home. In accordance with CDC and IDPH recommendations, social distancing will be observed, and masks will be required.

To order memorial trees or send flowers to the family in memory of Freddie Colson, please visit our flower store.