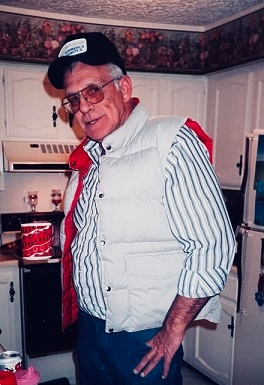 Earnie Gene Johnson, 76, of Norris City, passed away on Sunday, January 31, at the VA Medical Center in Marion, Illinois.  He was born on July 12, 1944, the son of R.J. and Mabel (Sittig) Johnson.  Earnie married Kathleen Joyce Tjarks on July 12, 1981, and she survives. He was a six year Army Veteran as well as served in Vietnam.  After serving his country, he came home and worked as a truck driver as well as at the Tri County Chemical Plant. Later he went back to truck driving into retirement at Raleigh Ready Mix.  If you knew Earnie, you know, this man was a hoot! He could make a joke or funny out of anything, and quick!  He never met a stranger and was certain to get a smile off any face. Earnie enjoyed spending time outdoors, going to local restaurants to aggravate, porch swinging with his cup of coffee, and fishing.  He loved his wife, children, and grandchildren so very much.  He will be greatly missed but now is living his best life, healed with Jesus.  "Later"

A celebration of life for Earnie Gene Johnson, will be held 11:00 a.m. on Saturday February 6, 2021 at Campbell Funeral Home in Norris City  with full military honors provided by the Carmi American Legion and VFW. Friends and family may visit from 10 a.m. until service time.
In Lieu of flowers, contributions can be made to Earnie’s wife Kathy Johnson to help with further expenses. In addition donations can be made on his behalf to Lick Creek Church & St.Jude Children’s Research Hospital.and will be accepted at Campbell Funeral Home in Norris City who is in charge of arrangements. In accordance with CDC and IDPH regulations, social distancing will be observed and wearing masks will be required.

To order memorial trees or send flowers to the family in memory of Earnie Johnson, please visit our flower store.