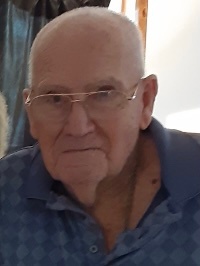 Donald R. Hunsinger 87 of Carmi passed away Wednesday night, December 2, 2020 at his home. He was born July 10, 1933 in Carmi, the son of Raymond and Bessie (Jones) Hunsinger. Donald married Pauline Doss and she preceded him in death on January 07, 2009.

Donald worked in the oilfield for 30 years for the Gwaltney’s. He was a veteran of the United States Army and was a member of the American Legion Post #224 and the Carmi V.F.W. He also enjoyed fishing.

Donald is survived by his son, Timothy (Linda) Glascock; his daughters, Donnita Smock, Alison Barbre and Ronda (Richard) Allison and three grandchildren. He was preceded in death by his wife, brother, Charles Hunsinger; sisters, Marilyn Cleveland and Frances Nelson and two daughters, Darla and Debbie Hunsinger.

A memorial service will be held on Saturday, December 12, 2020 at 11 a.m. at the Carmi New Beginning Church of God with Kenny Rager officiating. Online condolences may be left at stendebackfamilyfuneralhome.com The Stendeback Family Funeral Home in Carmi is handling the arrangements.

To order memorial trees or send flowers to the family in memory of Donald Hunsinger, please visit our flower store.