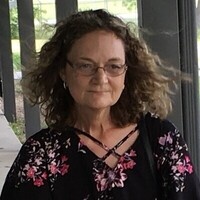 Dale Ann Graves, 67, of Monticello, IL passed into Heaven at 8:22am on Friday, July 15, 2022, at Carle Hospital in Urbana with her husband and children by her side.
Dale Ann was born September 16, 1954, in Carmi, IL to Virgil and Gloria (Pyle) Immel.  She married Kevin J. Graves on October 22, 1977, in Norris City, IL.
Dale is survived by her husband, Kevin, daughter Kaley (Tristan) of Cisco, son Colin of Nashville, TN, brothers Randall (Beth) Immel of Newburgh, IN, Ron (Martha) Immel of Carmi, sisters Deena (Marcus) Morris of Enfield, Sara Batteiger of Mt. Vernon, IN, and Debbie (Larry) Loftus of West Frankfort, along with many beloved nieces and nephews.
Dale and Kevin lived in several different towns in central IL before settling in Monticello in 1983.  She was employed by different companies including Bergner’s in Champaign, where she managed their Hallmark store and Accessories department.  Dale stopped working outside the home in 1987, dedicating herself to caring for her children, Kaley, born in 1987 and Colin, born in 1992.
In 2003 she began working as a cook at Monticello Middle School and as a clerk at Allerton Library in Monticello.  Dale absolutely loved these jobs and said she had two great worlds; kids (and chaos) of the middle school followed by the peace and quiet of the library.  She cherished the relationships that she developed during this time and regretted having to stop working in 2016 due to complications from surgery. During the pandemic, she returned to work delivering medications to nursing homes and assisted living facilities. Dale attended the United Methodist Church in Monticello, though often online the past two years.
Like her mother, Dale was an avid reader and combined that pastime with watching the many different birds drawn to her feeders (and keeping the squirrels off them). She recently shared with Kaley that one day while she was outside sitting in her favorite spot on her swing, she saw a baby bird fall out of its nest learning how to fly.  It hopped around a few times, but eventually landed right in her lap for a few minutes before it flew away. Kaley told her that she is now a Disney princess, and that couldn’t be more true.
Dale resisted new technology at first, but this quickly changed once Kevin bought her a tablet. There wasn’t a day that went by when she wasn’t sharing something interesting or funny that she’d found online. Her favorite answer to most questions asked by her family was “Google that!”
Those who knew Dale’s full story were witness to an inspirational life.  She was diagnosed with Hodgkin’s Lymphoma her senior year of high school in 1972 and received chemotherapy and radiation treatments that saved her life.  Unfortunately, the radiation devastated her body and resulted in months of hospitalization at Barnes Hospital in St. Louis.  She recovered but fought similar side-effects her entire life, including two other types of cancer.
Regardless, she refused to let her life be defined by health issues. She never complained and her often repeated words when she had to have medical care were, “you don’t have to look very far to find someone having a tougher time than you.”  Her humility was genuine, and she would never acknowledge the strength and determination she displayed, usually laughing it off and saying, “Better than the alternative…” Hers was a life of love, faith, and gratitude for decades of family and friends that she never took for granted. Dale never liked the phrasing of someone “losing their battle” with cancer.  She had recently read a different perspective, that the cancer died with the person so it was a tie. “I like that,” she said.   Dale’s afflictions from cancer treatments ended on July 15th.  After enjoying a long beautiful life, she is now living eternally with her Lord Jesus Christ.
Dale Ann’s visitation in Monticello will be at United Methodist Church from 5:00 – 7:00 pm on Thursday, July 28th.   Arrangements are being handled by Mackey-Wright Funeral Home, 215 E. Washington St.

Her memorial service will be held at the United Cumberland Presbyterian Church in Norris City, IL on Saturday, July 30th at 11:00 am, with visitation starting at 9:00 am. Arrangements handled by Campbell Funeral Home, Norris City.     In lieu of flowers, donations may be made in Dale’s name to The Baby Fold in Normal, IL
(thebabyfold.org).

To order memorial trees or send flowers to the family in memory of Dale Graves, please visit our flower store.