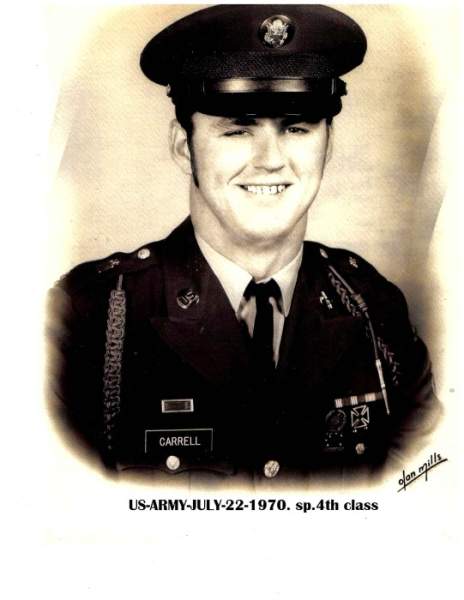 Billy L. Carrell, Sr. 71 of Carmi, passed away Tuesday July 21, 2020 at Deaconess Gateway Hospital in Newburgh, IN. He was born September 6, 1948 in Evansville, the son of Billy Joe and Mary Joe (Schmittler) Carrell. He married Freda Darlene Midkiff on February 27, 1971.

Bill retired after working several years for the City of Carmi. He was a veteran of the United States Army and was a member of the Carmi American Legion Post. He enjoyed working on computers and had also loved riding motorcycles. He loved telling stories on Facebook about Carmi, "The Way It Used To Be".

He is survived by wife, Darlene; daughter, Paula Jo (Eric) Dismuke of Harrisburg; sons, Billy (Sarah Leinicke) Carrell of Carmi, Joshua Jacob Carrell of Globe, AZ and Jared Carrell of Carmi; eight grandchildren and one great grandchild; brothers, Joe Carrell and Jack (Debbie) Baker of Carmi and sisters, Sherry (Bill) King of Carmi and Gaye Wood of Albion. He was preceded in death by his father, Billy Joe Carroll, his mother, Mary Jo Baker and his father that raised him, Jack Baker; and a granddaughter, Jonah Dismuke.

No services will be held. The Stendeback Family Funeral Home in Carmi is in charge of arrangements. Online condolences may be left at stendebackfamilyfuneralhome.com

To order memorial trees or send flowers to the family in memory of Billy Carrell, Sr., please visit our flower store.