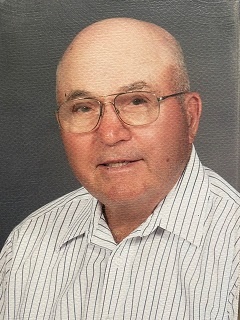 Allen G. Sailer, 98, of Carmi, Illinois, passed away peacefully at home on Tuesday, September 28, 2021, with family at his bedside. Allen was born at home June 17, 1923, to Albert and Beulah (Winter) Sailer and was the oldest of 5 children. His life’s work was farming and he was still active on the farm as recently as 2 months ago. He was very proud to have graduated from Carmi High School in 1942. He served in the U.S. Army at the end of World War II.  After returning from the War, he married Helen Garrison on September 4, 1949, and she preceded him in death on June 11, 2017. He  was a proud member of the VFW and American Legion, where he was a member for 76 years. He also served on the Big Prairie Board.
He is survived by daughter Jan Bryant, Liberty, MO., son Jack (Gina) Sailer, Carmi, IL., grandchildren Sarah (Aaron) Hoskins, Lesley (Greg) Comer, Jill (Brett) Loxterman, Beth (Jeff) Studebaker, Kati (Chris) Inlow, Luke (Lindsey) Sailer and Chase (Hannah) Sailer. He is also survived by 12 great-grandchildren: Noah and Levi Hoskins, Ellie and Reid Comer, Theron and Hunter Loxterman, Griffin, Tucker and Charlotte Studebaker, Maggie Inlow and Tripp and Scout Sailer. Other survivors include 3 sisters-in-law: Mary Sailer, Betty Sailer and Kate Whipple, son-in-law John Keil, nieces, nephews and numerous cousins.
He was preceded in death by his wife, and daughter Lou Keil and infant twin grandsons, son-in-law Ron Bryant, brothers Glenn and Wayne Sailer, and sisters Alma Stanhope and Lola Elliott.
The family would like to thank special friends Laurie Frashier and Richard and Koann Chapman.
In lieu of flowers, the family request donations be made to the John Crawley Scholarship fund established by the class of 1942 (in 1962) for graduates of Carmi High School and will be accepted at Campbell Funeral Home in Carmi.
A graveside service will be open to the public at 2 p.m. Sunday, October 3, 2021 at Big Prairie Cemetery. Campbell Funeral Home is in charge of arrangements.

To order memorial trees or send flowers to the family in memory of Allen Sailer, please visit our flower store.