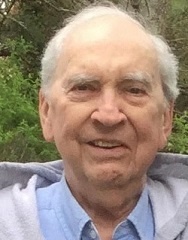 Albert Gilpin Schoemann, 90, passed away at his home in New York City of cancer, with his family nearby, on Wednesday, July 29, 2020.

Albert was born on November 24, 1929, in Carmi, Ill. He was the son of Jesse H. Schoemann and Violet Gilpin Schoemann. As a boy he helped in his father's clothing store, A Schoemann and Son on Main St in Carmi, and spent summers at Culver Academy Sailing Camp or visiting family in Oklahoma. He graduated from Antioch College with a degree in Theater, and performed with the Antioch Shakespeare Festival under the direction of Arthur Lithgow, and as a newscaster in Ohio radio. He then pursued graduate theater study at Smith College until called into the US Army where he served two years.

He moved to NYC to finish his theater study at the American Theater Wing after the Army, and worked as a Page at the NBC television studios in NYC, during the era of live television production.

He worked as an actor's agent, a production and stage manager for Off-Broadway shows, and eventually moved into the area of casting. He developed and headed the national casting program at Theatre Communications Group (TCG) for major regional theatres thoughout the US.

Albert loved actors, and their craft. He delighted in finding young talent, and moved from casting into General Manager of the National Shakespeare Company, a touring company that hired young actors from throughout the US to tour colleges and universities in Shakespeare productions. In 1974, he co-founded, with Philip Meister and Mario Siletti, the National Shakespeare Conservatory, a fully accredited professional Two Year actor training program in New York City, and Summer Conservatory in the Catksill mountains of upstate New York of which he eventually became Director until 1998.

Always ready for a new adventure, in retirement he and his wife Pamela Hare Schoemann spent summers in East Orleans, MA on Cape Cod, running the family summer vacation rental business, Holly Tree Cottages by Nauset Beach, and enjoying his family and grandchildren.

Other than his parents, Albert was preceded in death by his son Eric Briscoe at the age of 10, in 1970. He leaves behind his partner and wife of 47 years, Pamela, his son Sam and partner Jana of Los Angeles, CA, daughter Molly McCann (Josh) Lefkowitz of New York City, daughter Sarah (William) Lane of Atlanta, GA; 6 loving grandchildren, Sammy, Natalie, Seamus, Dune, Noam and Mabel; his sister Gail Degnan of Aptos, CA and lots of nieces and nephews and cousins.

The family would like to give thanks to the Irving Wright Center on Aging of Weill Cornell Hospital and VNS NY Hospice.

In lieu of flowers, please send donations to Us TOO International Prostate Cancer Education & Support Network at www.ustoo.org

A celebration of Albert's life will be held online at a later date.

To order memorial trees or send flowers to the family in memory of Albert Schoemann, please visit our flower store.